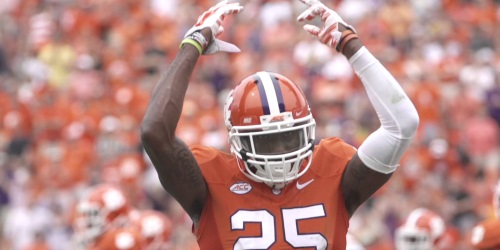 We’re 10 weeks down and this season has already been filled with the drama we were hoping for. As the second edition of the CFP rankings come out tomorrow the virtuoso will reveal his top 10 and as expected they are as debatable and controversial as it gets. SEC and Big 10 fans beware – you may leave here with a sour taste in your mouth.

Houston is one of the 6 remaining unbeaten teams in the FBS and would be a shoe-in for a New Year’s 6 bowl if they can stay unbeaten. The Cougars play a ranked Memphis team this week, a much improved UCONN team next week and end the season against an underrated Navy team who’s sole loss came at the hands of Notre Dame. If Houston can navigate through these next 3 games they’d likely see a ranked Temple team in the first ever AAC championship game. While I don’t see even an undefeated Houston team getting the nod for a playoff bid – they would make a strong case and be a very exciting AAC representative in a New Years 6 bowl. Look out for the Cougars, and look out for the AAC in future years.

I know what many are thinking. ‘How can an undefeated Iowa team be as low as #10?!?’ Well, simply put, they haven’t exactly been overwhelmingly impressive this season. I’m just not sold on the Hawkeyes yet. They’ve got the luxury of not having to see Ohio State, Michigan State or Michigan this season until they eventually run into one of the 3 in the Big 10 title game. If they run the table and win that game, they’re in, no question. But for now, they’re 10.

TCU has been beaten up pretty badly all season on defense and just got beaten up even worse on Saturday by Oklahoma State. The one loss Horned Frogs aren’t out yet though. If they can win out they have a valid argument but as last year showed us a 1 loss big 12 team could wind up as the odd man out. Beating Kansas this week and getting back on the right track will be a good start for TCU, but if they falter again the Horned Frogs can kiss their playoff dreams goodbye.

LSU was outplayed in every facet of the game on Saturday against Alabama. Fournette was held to 31 yards and didn’t exactly look like the heisman favorite we’re all used to seeing. I’ve been saying for weeks now that if you can stop Fournette, you can stop the Tigers, and Alabama proved me right. With 1 loss LSU isn’t out, but they will need some help to reach the SEC title game and will need to look a lot better down the stretch than they did this past week.

Most Impressive Victory: 56-35 W vs UCLA

Stanford is looking to be this season’s Ohio State. After an ugly week 1 loss to Northwestern, the Cardinal have looked as good as anybody in the country. They’ve had one real scare since the early loss and it was on the road in the rain against a much improved Washington State team. If Stanford wins out – which would include beating the Irish and whomever they may face in the Pac-12 title game – it will be hard to keep this team out of the playoff.

Tide fans will call me an idiot here but for some reason Alabama is always the team who is most forgiven when they lose. Yes, the Tide dominated LSU this past week, but don’t forget about their loss at home to a now unranked Ole Miss team and the fact that a very mediocre Tennessee team had a legitimate chance to win at Bryant Denny Stadium late in the 4th quarter. Alabama’s two best wins have come against LSU and Wisconsin and there is no doubt the Tide seem to be a different team at this point in the season but before considering them a shoe-in for the national championship game, lets see them earn it on the field first.

Ohio State is looking a lot like the 2014 Florida State Seminoles. Defending champs, undefeated, but not overly impressive with anything they’ve actually done on the field. You know, where it actually matters the most. That said, the Buckeyes are still undefeated and still control their own destiny. If the season ended today I’d have the Buckeye’s outside of my top 4 as they’ve looked shaky at times and have still yet to figure out their quarterback problem. Wins against Michigan State and Michigan down the stretch will absolutely solidify this team but until then we need to see more out of Ohio State.

Yes, Notre Dame has lost once. On the road. In the rain. By 2 points. Oh yeah, and to the top ranked team in the country. If there is such a thing as a good loss, that’s it. And considering the world once had to sit through a second LSU-Alabama game to determine the national champion (with Alabama failing to even with their division), who wouldn’t want to see the Irish get another shot at Clemson at a neutral site? Even with their backup quarterback the Irish continue to look impressive, dismantling a gritty Pat Narduzzi coached Pitt team this weekend on the road. Based on their body of work it’s hard to deny the Irish and if they continue to win and defeat an eventual Pac-12 champ Stanford on the road they will have a very strong case for inclusion. Keep an eye on the Irish.

If Baylor is going to get into the playoff this year – it will be clear as to why. The next 3 weeks the Bears get to host Oklahoma, travel to Oklahoma State, and travel to Fort Worth to play TCU. Up until this point of the season Baylor hasn’t played anybody who’s anywhere near relevant. Though they average a similar amount of points per game as a Big 10 basketball team (57), the Bears need to prove their worth against a quality opponent. This week’s matchup against Oklahoma will give us a good measure of where Baylor stands – and as to whether or not the freshman Jarrett Stidham can lead this team the rest of the way.

Oklahoma State’s victory this past Saturday was a statement win. We already knew the Cowboys could score with the best of them but this week we learned that they can also play some defense. Mike Gundy’s team was a sleeper to come out of the Big 12 this season and last week they showed the country why they need to be taken seriously. Iowa State should be no more than a warm up for the Cowboys this week before Baylor comes to town for what will be their biggest test of the year and may ultimately decide who heads to the College Football Playoff as the first ever representative for the Big 12.

Clemson is without a doubt the best football team in the nation right now. The undefeated Tigers have handed Notre Dame their only loss of the season and took down the defending 3-time ACC champ Florida State Seminoles this past Saturday en route to clinching a spot in the ACC title game. If Clemson can avoid an upset against in state rival South Carolina to end the season and seal the deal in the ACC title game which is looking like it will be against a hot North Carolina team, the Tigers are in. Clemson is proving that ‘Clemsoning’ is a thing of the past as they look to remain #1.