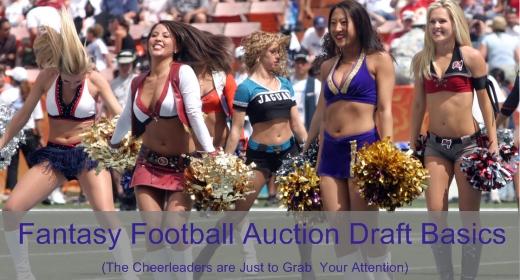 *For Simplicity’s Sake, I am Basing the Answers to My Questions off of the Default Fantasy Football League Settings (16 Man Roster, $200 Budget, $1 Minimum Bid).

Before I started looking for specific answers to my questions about an auction draft for our fantasy football league, I had to understand the basics.  The main difference in an auction draft is pretty obvious.  Instead of snaking through the draft order, any team in the league can place a bid on any player.  While highly unlikely, it could be possible to draft the top rated player at every position, simply because you didn’t have to wait in line while other teams picked players.  Basically, if you got the cash – you have a chance at the player.  Every team in the draft nominates a player to go up for auction – and then the bidding begins.  Usually, the highest rated player goes up for auction first, and then it goes in order from there.  There is a set time for the bidding round’s completion, so it will be important to know before the auction starts which players you wish to bid on and how much you are willing to spend for a single player.  For reference, here is a screenshot of a sample auction draft interface.

Questions? I had plenty, so here we go.

Can You Run Out of Money in a Fantasy Football Auction Draft?

Technically, no, you cannot run out of money in an auction draft; but you can, however, be left with hardly enough money to make aggressive bids.  Let me explain further.  Your team will have a maximum bid amount that you are allowed to spend on a single player.  This amount will vary based on two things:

Every team start off with $200 and 16 roster spots.  The fantasy football auction draft minimum bid is usually set at $1.  That means that in order to successfully bid on any player, you must have, at minimum, $1 in your account.

If you really want Adrian Peterson or Tom Brady, you can spend $185 on them at the first auction and then basically wander around and do nothing for the rest of the draft until most of the bidding is over.

It would appear that a strong strategy is needed to make it out of the first few rounds with decent players, but enough change in your pocket so that the rest of your team isn’t filled with scrubs.  I would recommend an auction draft strategy that included your top prospects at each position, and how much you would be willing to spend on that one player.

What if I Have Money Remaining in My Account after the Auction Draft is Over?

Well, then you messed up.  I say that jokingly, but it really is the truth.  There is no advantage to having money left over, so you might as well spend it all.  A few dollars in your account after the draft is no big deal, but if you have $50 bucks in there at night’s end, you probably aren’t going to be in the running this season.  Don’t ruin your fantasy football season by being too frugal.  If you really think that a player is going to make a big impact on your team, bid away.  Think about the 70-30 rule, when drafting.  70% of your money should be spent on 30% of your roster.  The remaining 30% of your money will be dispersed between the remaining 70% of your team.  For some actual figures, this is how it plays out.  By the time you draft your 5th player, you should have spent approximately $140.  That’s where most of the big names are going to go anyways, so you might as well try and get some.  Again, there is no bonus for having money left over.  Even in a traditional draft, your last 4 or 5 roster spots are usually low value players that get dropped in a few weeks anyway, don’t save any money for them if you don’t have to.  You should probably have $5 left when you have 5 picks remaining.

How Much Should I Expect to Spend for the Top Pick in an Auction Draft?

This number will vary on how aggressive other league owners are, and obviously, how badly any one person wants that top player.  When considering how much to spend on a draft pick, consider that player’s value over their potential replacement.  How much better is Arian Foster than Adrian Peterson? Last season it broke down to 80 points over the course of the year.  About 5 points a game.  Depending on how much you think you can sacrifice in the way of points, you can find a fairly comparable replacement to either AP or Foster up until about the 5th or 6th pick.  If you take a look at the tips in the section above, you should be expecting to spend about $140 on your first 5 picks.  Of that money, maybe 30% should be spent on your top pick, unless he’s really valuable.  Here’s the thing.  You’re gonna have to shell out big money for a name sometime, so get in the game early and take control.

Does an Auction Draft Change Strategies from a Regular Draft?

It does and it doesn’t.  On one hand, you could potentially have a team with Adrian Peterson, Jamaal Charles, and Peyton Manning (though you wouldn’t have much else).  If you think that this “Big 3” along with whatever scrubs you can afford after that is enough to win, then by all means, go for it.  I definitely think that an auction fantasy football draft favors a team with a few dominant players and the rest scrubs than a team that is fairly balanced across the board.  If you have 3 guys that can put up 75% of the scoring you would need to win a game, you aren’t going to have to ask much (or care much) from your other players.

In the basic sense, an auction draft doesn’t really change much else.  Running backs are still the most valuable pick in the draft, and you should try to fill your team with as many quality backs as possible.

Even though an auction draft seems intimidating at first, don’t let that discourage you.  At the end of the day, a draft is just a draft.  There is no guarantee that the top rated player is going to have the best year, or that your 10th rated QB won’t find any chemistry with their receivers and have some big games.  Every pick is a gamble especially with the nature of the sport and the injuries that come with it.

Also, think of things this way…If you have the number 1 pick in a traditional draft, you won’t get to pick again until the 20th spot.  So if you spend money to get the top pick, and then can’t really jump into the auction until 10 picks down the line, you still come out on top compared to a traditional draft because you have the potential to draft #’s 1 and 11.  Think outside of the box, don’t be afraid to take risks, and have fun – because fantasy football is more than just winning. Yeah Right.