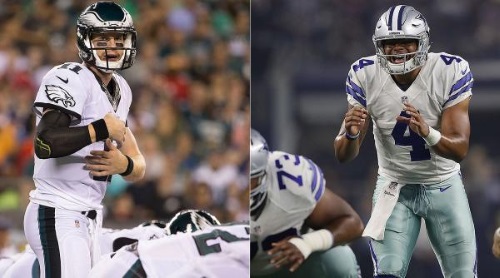 Dak Prescott will lead the 5-1 Dallas Cowboys against Carson Wentz and the 4-2 Philadelphia Eagles in a game with first place on the line in the division.

Wentz looked every bit a rookie on Sunday, as he went for 138 yards with a touchdown and two interceptions.  The second overall selection in this year’s draft was picked up by the Eagles defense and special teams in the 21-10 victory over the previously undefeated Minnesota Vikings.

The Eagles defense was stifling against the Vikings, sacking Sam Bradford six times and creating four turnovers.  Special teams provided a boost in the form of Josh Huff’s 98 yard kickoff return TD that put the Eagles ahead to stay.

Philadelphia head coach Doug Pederson knows these rookie quarterbacks can use some help.

“Both teams have the ability to run the football, and it just helps your passing game,” Pederson said.  “We both have young quarterbacks and we have to rely on defense and special teams, and that running game becomes so important.”

Prescott and the Cowboys are coming off a bye week, looking to get healthier with a few familiar faces returning to the lineup.

Bryant has been out of the lineup with a hairline knee fracture suffered in a 31-17 victory over the Chicago Bears on September 25th.

“He’s dealt with this injury, he’s chomping at the bit to play,” Dallas head coach Jason Garrett told reporters on Wednesday.  “Medically we felt like it was important to wait, to heal up a little bit and give it a little more time.”

The Cowboys last game was a 30-16 victory over the Packers at Lambeau Field.  Prescott threw for 247 yards, 3 TDs, and his first career interception as a professional.

“It’s starts with his preparation, he was always ready,” said the Dallas coach.  “He could always handle himself at the line of scrimmage, you could tell he was prepared and it was important to him.”

Prediction Time:  The battle of the rookie quarterbacks goes the way of Prescott this time.  The Dallas rookie shines, throwing for three more touchdowns while Wentz struggles in his first trip to Big D.  Bryant scores upon his return and the Cowboys get a stranglehold on the NFC East.  Cowboys win 31-21.