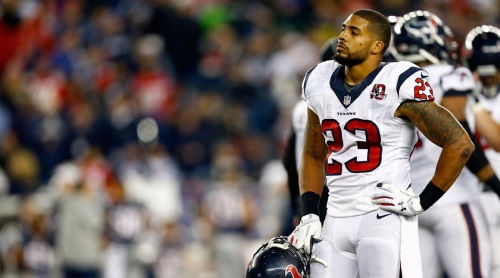 Today we saw the retirement of one of the best running backs in the NFL with Arian Foster calling it quits after eight years in the league. Foster, who had been dealing with multiple injuries the past few seasons decided that it was time to walk away from the game. Foster was one of the most talented backs in the past ten years, posting consistent, and great numbers when healthy leaves a mixed legacy of success and heartbreak.

“This game has been everything to me … my therapy, my joy, my solace and my enemy,” Foster wrote via Uninterrupted.com. “I’ve learned to love every facet of this game, from the peak of accomplishment to the gutter of criticism. And it all makes the ride worthwhile. I’ve been fortunate enough to play many successful years in this league. I’ve given a lot to this game and given up a lot for it. But it has returned to me more than I could have ever asked for.

“Faceless gladiators have been shuffled in and out of this arena for decades and I’m proud to have taken part in that legacy. My father always said, ‘You’ll know when it’s time to walk away.’ It has never been more clear than right now. I’m walking away with peace. I know it’s not commonplace to do it midseason, but my body just can’t take the punishment this game asks for any longer. … Every athlete would love to go out as a Super Bowl MVP, riding off into the sunset with the crowd cheering their name. Unfortunately, life has other plans and they’re usually opposite the imagination. But that imagination got me this far and I could not be prouder of the things my teammates and I accomplished in this game.”

I am afraid that we never truly got to see the full potential of Foster as his career had been cut short due to recent injuries, and unfortunately Foster will go off into the sunset finishing what is now another season forgotten in the wake of his great career only a couple of years ago. He is one of those figures that you wish had retired with his former team possibly winning them a championship. His career is full of “What could have been” thinking, and I wish him all the best in whatever he pursues after football.

In his career, Foster ran for 6,527 yards on the ground, with 54 touchdowns, and 2,346 yards receiving to go along with 14 touchdowns. Before cutting ties with the Texans, Foster had become their all-time winning rusher in yards, touchdowns, yards per game, and total scoring for a non-kicker.