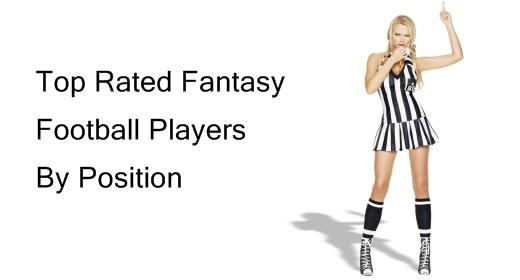 As your 2011 fantasy draft gets closer, you need to know who is going to be big and who is going to bust before it comes time to pick them.  Thankfully, we have put together a list of the top 5 fantasy football players at every position.  These fantasy football position rankings are based off of last year’s performance, this year’s potential and just a little bit of magic.

There’s no doubt that Adrian Peterson is going to be one of the top fantasy running backs in 2011, and he’s in some pretty reputable company now.  Arian Foster is on this list, mainly because of his production last season.  He is without a doubt the number 1 rushing option on that team, even if they do throw the ball entirely too much. Mo-Jo is another good pick, just because he doesn’t split carries with anyone and the Jags have a pretty balanced attack.  Jamaal Charles and Chris Johnson are some of the fastest guys on the field, and while they might not get as many attempts as other top fantasy running backs, they have the potential to do more with each of those carries than just about anyone else on the list.

With the exception of Michael Vick, the list of top fantasy quarterbacks hasn’t changed a whole lot in the past few years.  Sure, some of the rankings might have shuffled a bit, but these are your guys.  The ability to stay on the field is going to be the big issue, especially for Vick and Rodgers who like to get out and run a bit, but that is part of what makes them great fantasy quarterbacks – the dual threat.  Brady, Manning, and Brees round out our list of top fantasy quarterbacks for the 2011 season, as they are still considered the best pure quarterbacks in the league.  Not too many mistakes, consistent output, and a knack for winning is what makes these guys your top QB picks for the 2011 fantasy football season.

Wide receivers are always tough to rank because they depend so heavily on their QB (one of the reasons why Larry Fitzgerald isn’t on our list).  But most of these top fantasy wide receivers for 2011 have strong QB’s throwing to them, which sets them apart from the rest.  Andre Johnson, when healthy, is always a threat for a big game, and Roddy White is the favorite target of up and coming Matt Ryan.  Jennings and Wallace make our list of 2011’s top fantasy wide receivers because of their down-field threat.  Send them streaking and throw it up – should result in a TD.  Calvin Johnson is on this list, mostly because of his performance last year. He is such a huge threat, no matter who throws him the ball.  He is one of the biggest, strongest, fastest WR’s out there today and that’s a combination that has fantasy owners drooling as the 2011 draft approaches.

Although it is an oft-overlooked position, there is still some considerable talent.  In our 2011 fantasy football draft guide, we warned you not to draft a TE very high, but if any of these guys are on the table, they are worth a pick in rounds 4-6.  Fantasy tight ends should be reliable, with good hands, and enough size and strength to be a formidable target in the red zone.  All of these guys (with the exception of maybe Dallas Clark) have that in spades.  Dallas Clark makes our list of top fantasy tight ends simply because he is more of a WR than a tight end and is one of Peyton Manning’s favorite targets.  That reason alone makes him worth a high draft pick.

Ok, so not all of these kickers play their home games indoors, but the ones that don’t have proven to be extremely reliable.  Our list of top fantasy kickers for 2011 includes mainly kickers who have short to mid range power, but tons of accuracy.  They also are on teams that score a lot, because those extra points can really add up after a while.  Kickers might not be the most important position in the draft, but the last thing you want is to lose a game because your guy missed a couple easy chip shots.  Draft reliable kickers as opposed to kickers with a lot of leg power and you should be ok.

Defense/Special teams are quite possibly the most underrated fantasy position.  If you draft a good defense, you will be rejoicing week in and week out, and if you don’t – you will feel it where it hurts.  Our list of top fantasy football defenses for 2011 contains some of the most daunting, tough, ball-hawking squads in the NFL.  Don’t draft a defense too high, but if you see any of these names coming off the charts by the 6th round, you may want to throw your hat in the ring and snatch one up.